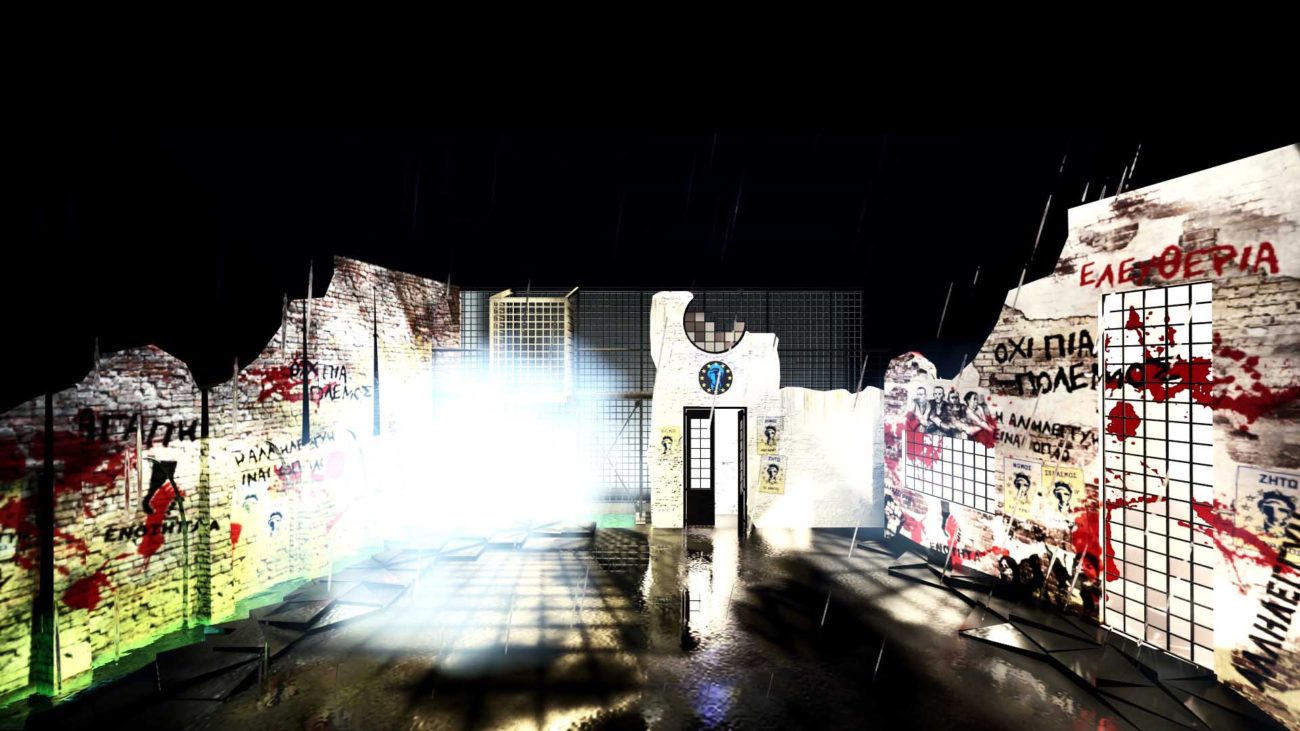 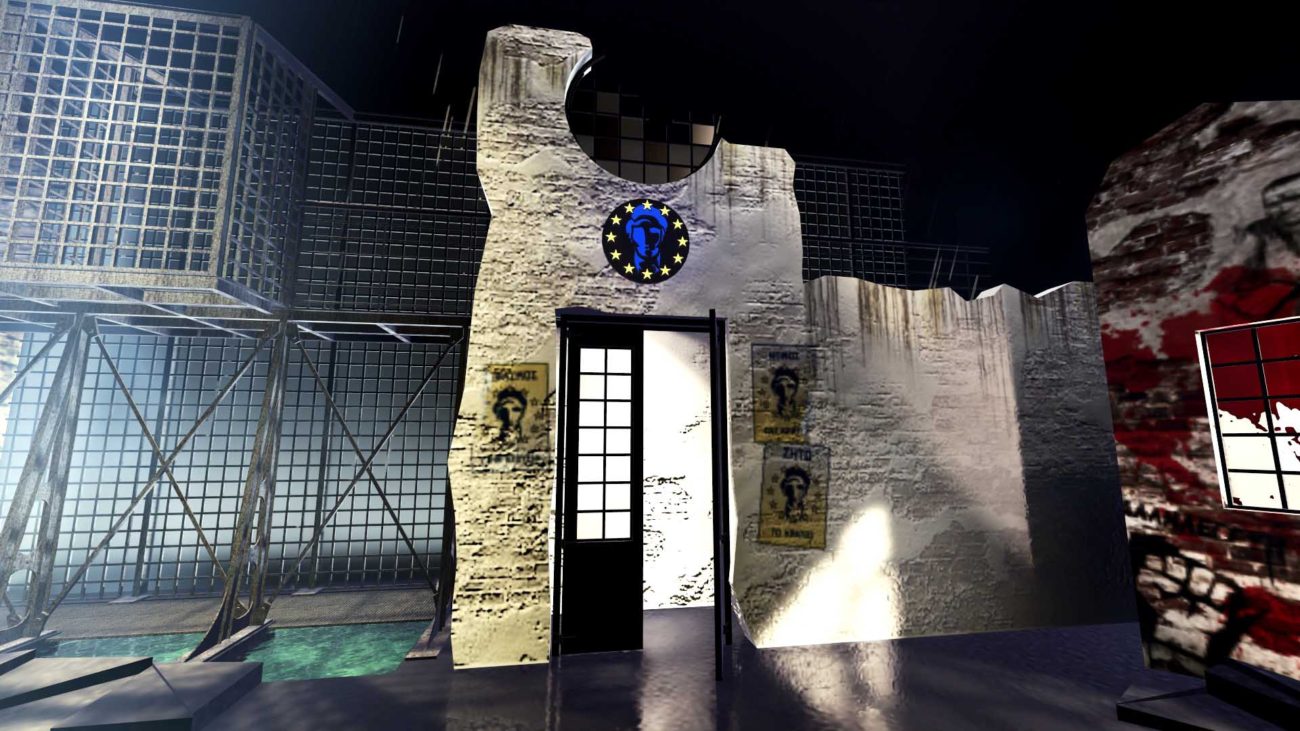 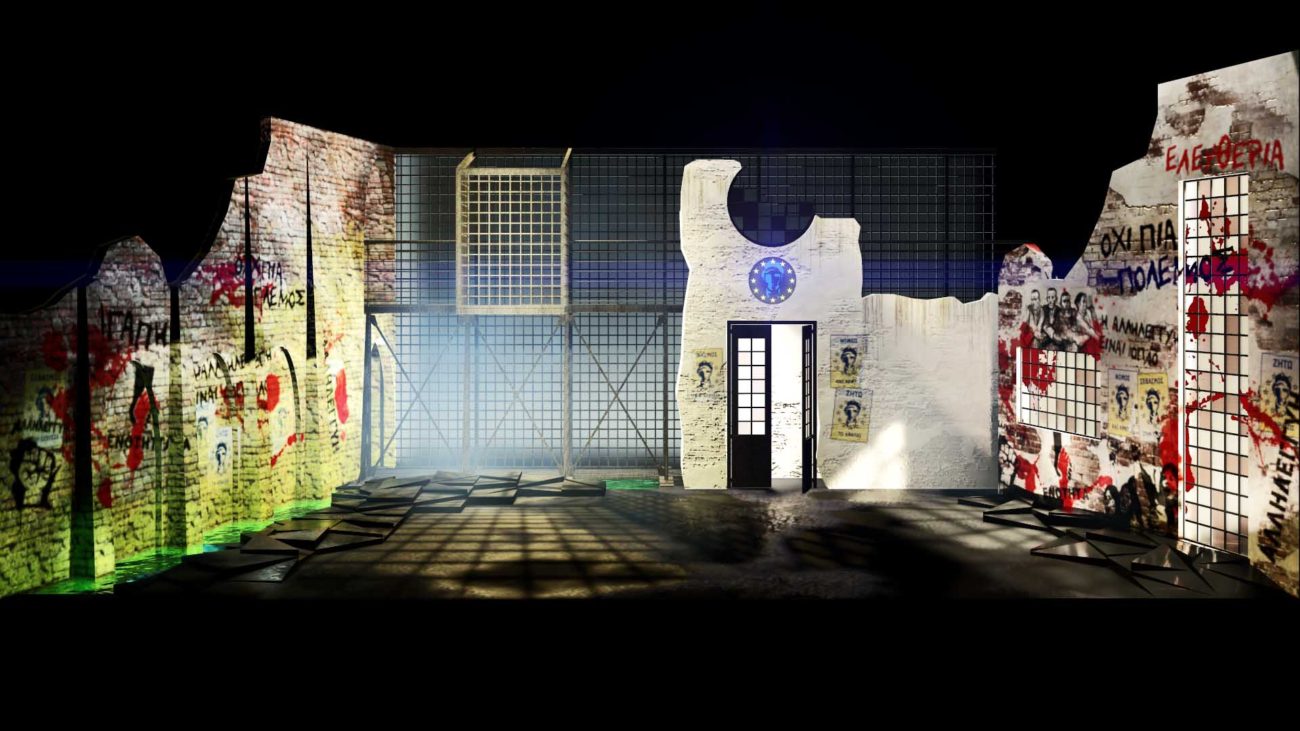 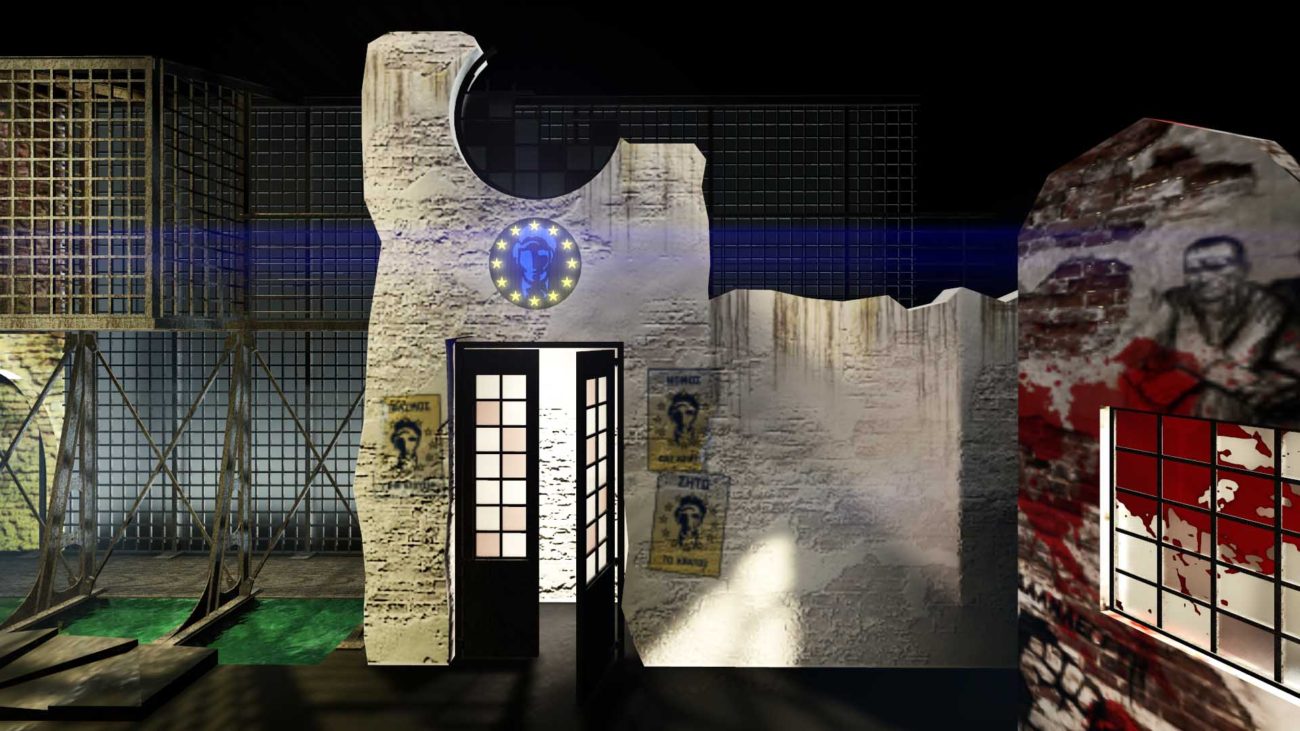 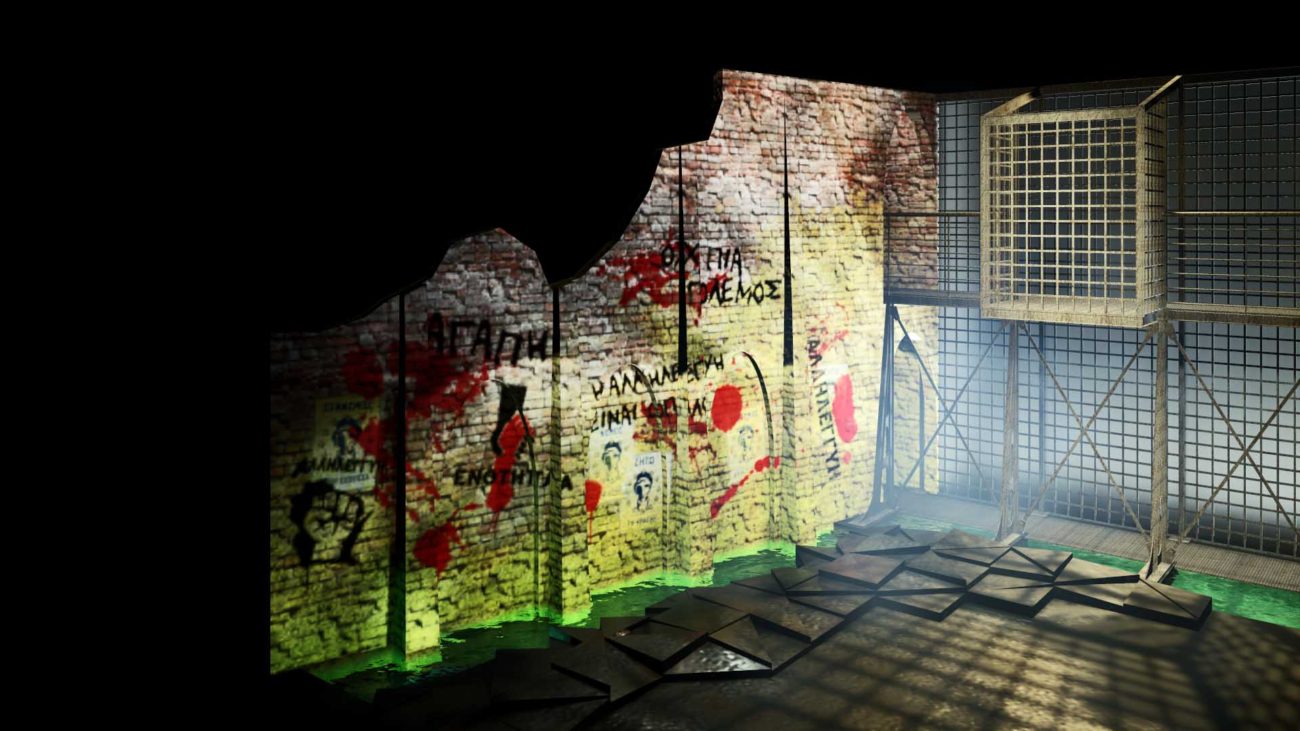 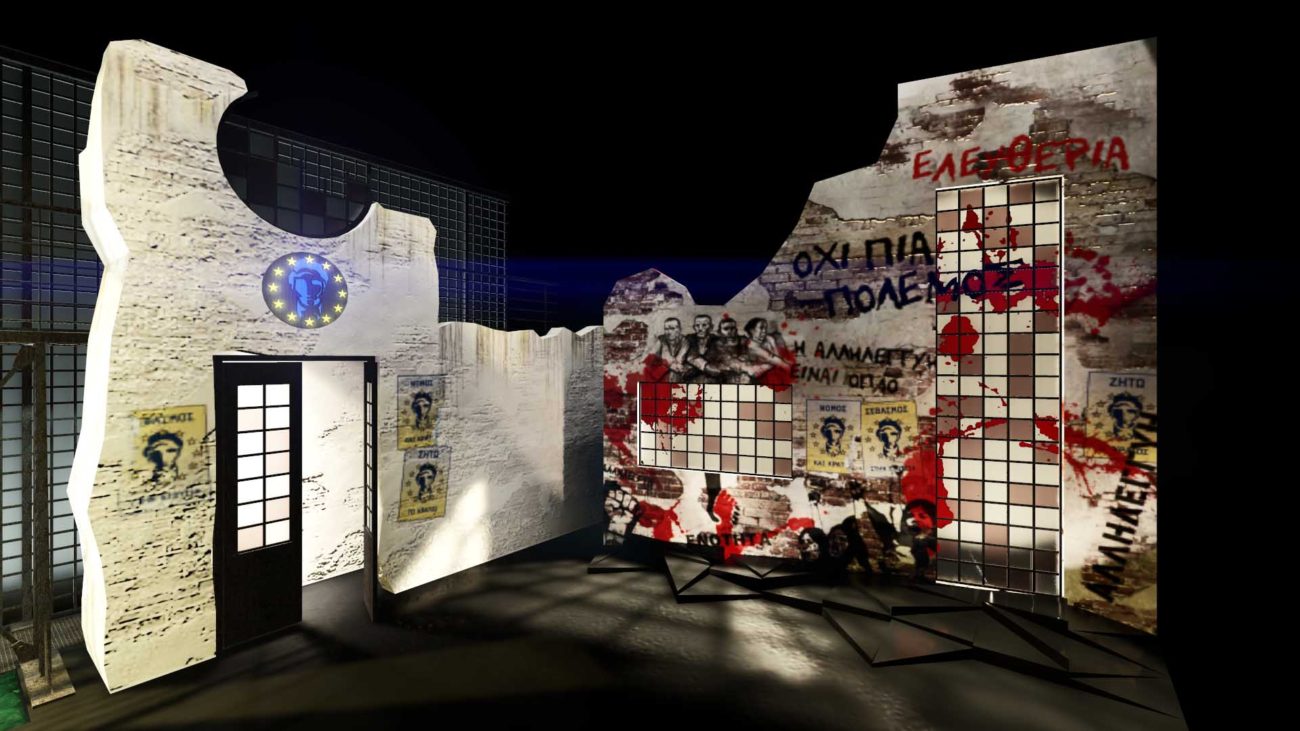 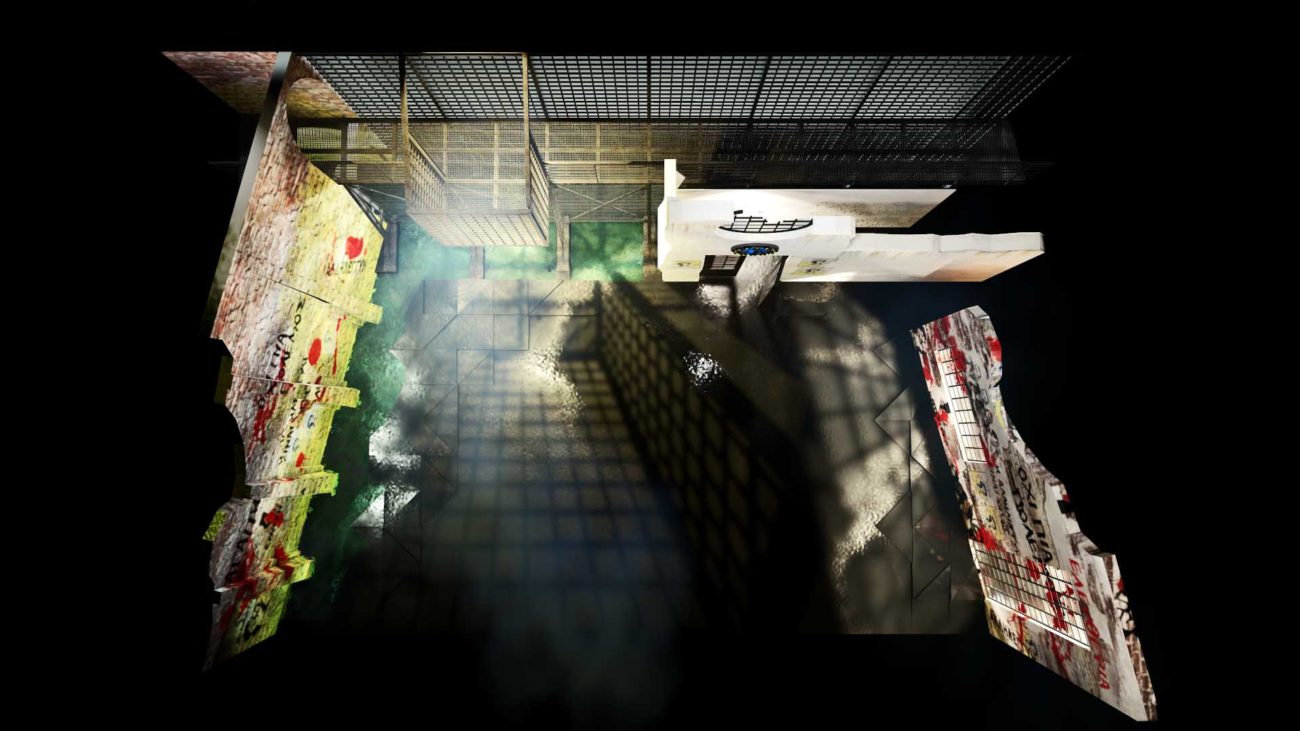 Set design for the theatrical performance in development project tragedy Antigone by Sophocles, in translation, adaptation, directed by Emmanuel G. Mavros and music composed by Dimitris Evangelinos, powered by EarthView.

The struggle of free will, against the authoritarian regime, the good of evil, are also reflected in the setting. The modern Thebes is an underground, underdeveloped and damp city, is depicted as ruined after Creon’s rise to power. The city is abandoned and corroded by water and mold buildings within an industrial environment symbolize the corruption of political power. The authoritarian regime fills the ruins of the city with propaganda posters, imposing respect through fear, while the “anarchists” – like Antigoni, respond with slogans of freedom, solidarity and love.

“The City”: Corroded and ruined walls with propaganda posters and “anarchist” slogans.
Dry construction of plasterboard with application of technical papier mache to create three-dimensional effect and final paint coating. The openings are made of metal standard sections and Plexiglas. “The Cabinet”: The seat of the regime – the former palace re-used by Creon dominates the center of the scene. Corroborated and this, but “freshly baptized” symbolizes the superficial and virtually absolutist power, which is seemingly interested only in the imposition of its supposed ideologies – in fact, in consolidating its position.
Construction similar to the rest of the city walls. An imposing illuminated coat of arms is placed above the main entrance of the governorate.

“Bridge”: Located in the backdrop of the scene and used as the entrance / exit of the city – symbolizes the change of political status, the transition to autocracy. Made of standard metal sections, painted to achieve the effect of rust and mold.

“The Antigone Cell”: The second central element of the scene. Connected and accessible from the metal bridge, the metal “cage” is integrated into the scenery.

“Flooring”: The wet element dominates the floor of the scenery, giving flesh to the underground and damp city. Corrosion from water is also evident on the floor of the stage. Manufactured from wooden cords, the raised floor is lined with mdf boards and is coated with cement screed or similar material. Water is additionally coated with waterproofing material. The whole scene is resilient for easy dismantling and transportation in the event of a tour.